We haven’t had a brilliant crop of stone fruits this year. Martin blames the weather!! There were some early ripening plums but on splitting open there was a little grub munching its way through each one’s juicy flesh – we need another codling moth trap at that end of the orchard next year. Apparently if they ripen early it’s a sign that the grubs have got into them.

The unaffected fruits though have been fine and we picked the whole crop yesterday. Only a couple of bowls full though so I decided to roast them and pop them in the freezer to enjoy with custard or Greek yoghurt as a simple pud through the winter.

Roasting really concentrates their flavour, mellowing any tartness and softening their skins.

I like to halve and destone them first as I like the colouring on the flesh as they cook but you could leave them whole. Toss in a bowl with some sugar then pack them fairly tightly onto a roasting tray lined with baking parchment and pop them in the oven for about 20 minutes until the flesh is meltingly soft and tender but not breaking up (about 180C/fan 160)

Pop into freezer bags in a single portion sized layer and suck the air out gently with a straw and freeze when cool. Packing them whilst still warm will produce some lovely juices but you could leave them to cool first.

As well as a sweet treat they work really well with soft cheeses – try with some brie for a great flavour combination. 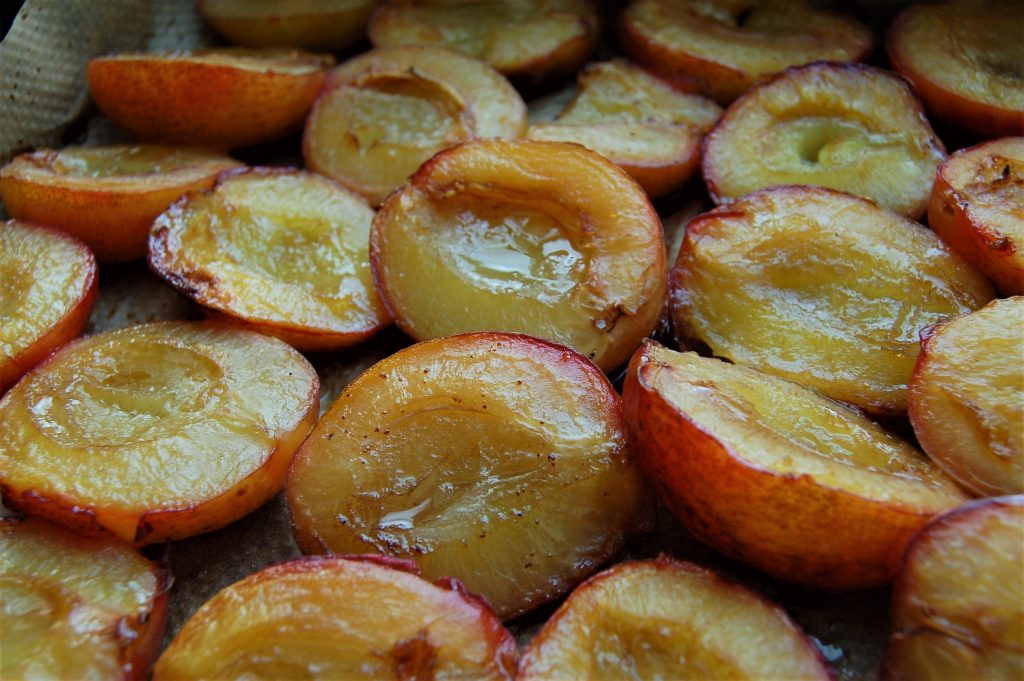 The Damsons were a bit of a disaster as well! Only a couple of handfuls to pick. Having said that we had such a good crop last year that we’re still eating the damson jam I made!

If you’ve been luckier and can’t process them all at once then they open freeze quite well although they do soften a bit when thawed.

I needed to make the most of the few that we had so I’ve made a thick luscious puree with them which is safely tucked into the freezer ready to use.

I didn’t bother stoning them as life’s too short but just popped them in a pan with a splash of water and some brown sugar –(about a quarter of the weight of damsons) you can add more later if they’re a bit tart.

As the juices are released you can cover and turn down to a simmer then cook until the stones are released from their flesh and the skins are soft. Stir now and again to prevent any sticking.

Pour everything into a sieve and really work them well with a spoon to push the skins and all the gorgeous pulp through.

Stir together and add some sugar if you need to then freeze in small portions. You don’t need much of the puree to add plenty of flavour so don’t waste it! 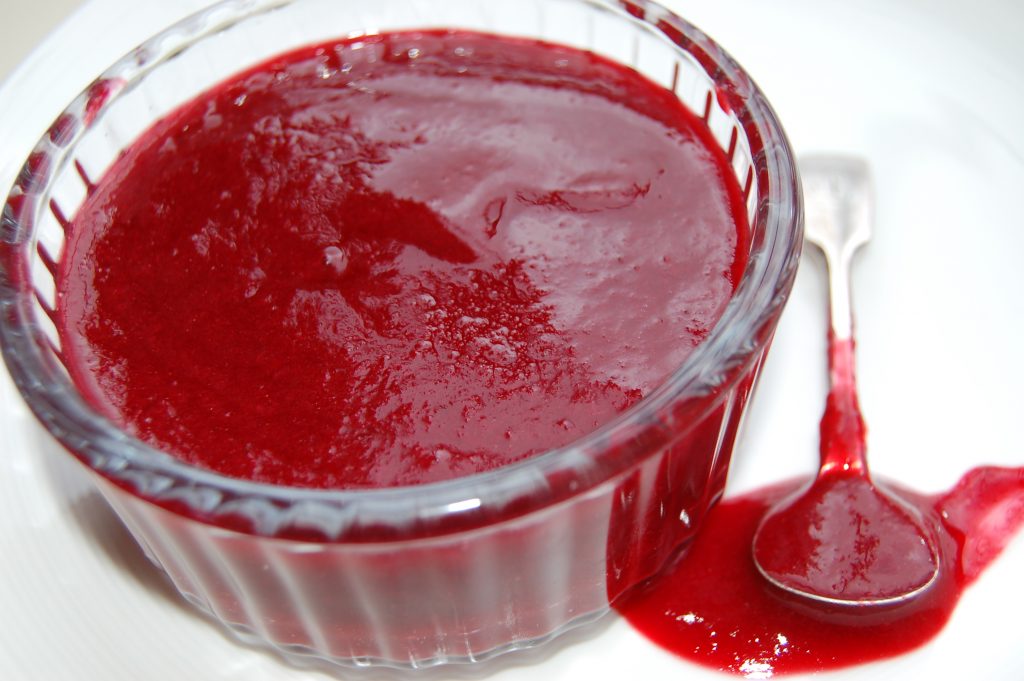 Make some custard (or for ease use a ready made one) and leave to cool. Pour about a third of the amount of custard into a large bowl and whip to soft peaks. Fold in the custard.

Add a good spoonful of puree for each person to the creamy mix and swirl through.

If you fancy a special pud then add in a good dash of Kirsch to the puree first!

Spoon carefully into serving glasses being careful not to lose the swirly effect then add a dash of puree to the top.

Enjoy with some shortbread fingers